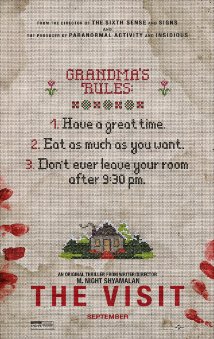 OK, I have a confession to make…..

I’ve tried, oh lord, how I have tried. I even made a chart showing his fall. (How geeky is that?) 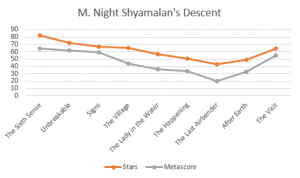 Here’s my mini-reviews of all his movies so far:

Which brings us to The Visit.

I am lucky that I have support for my M.NS addiction in my friend Jon who saw this movie with me.

So maybe I am speaking from the point of view of horrible past experiences and the law of low expectations but this movie was the first one I have seen of his in a while that I could actually see again.

The high level plot is that kids go spend a week with grandparents that they have never met because their mom had a major falling out with them before they were born. And as you expect, the grandparents start doing things that are bizarre. Small things at first but that get worse and more strange as the week goes on. (I mean, what can be creepier than grandparents, right?)

Filmed in the style of Blair Witch (grand-daughter is doing a film about the visit) I think forced Shyamalan to do what he does well. Focus on character and build tension through the story and not rely on special effects or being too clever. Things like being in bed and hearing strange noises right outside your door. The creepy shed. Cleaning ovens…. oh wait, you’ll get that one when you see the movie.

It also had some similarities to the Sixth Sense where parts of the movie don’t make a lot of sense until near the end and everything suddenly makes sense to you and you go “Ahhhhh! I get it now!”

The movie was a little slow at the beginning, I will admit, but it picks up and the kids themselves grow on you as you experience what they are dealing with. Although Shyamalan seems to like giving every kid in his movies some sort of OCD thing….. huh.

Anyway, this is a very rent-able/stream-able movie. No need to have the big theater experience with this one.

Mo As someone who barely manages to squeeze in as a GenXer my memories include more of the 70's than those younger GenXers. Reading and movies are my passions with some video gaming thrown in there for good measure!