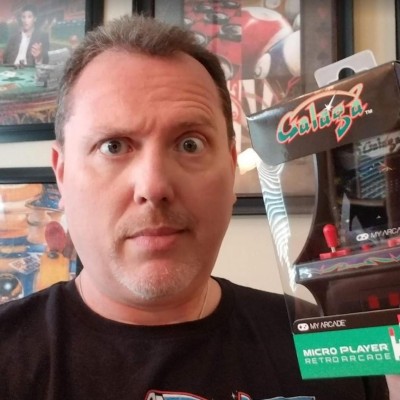 Jon Reddick is a well-credentialed nerd of the 80s, classic game fan, and technology geek. He merged those interests into the creation of GenXGrownUp: a weekly podcast and YouTube channel which explores and celebrates media, games, tech, toys, comics, and pop culture of yesterday and today through the eyes of Generation X'ers.
Videos
Channels

About This Episode Today, life screeches to a halt when your wi-fi goes down, but just three short decades ago, the internet was a brand new thing that we had no idea we even needed. In this episode we look back at the origins of the internet and how we experienced it in its early […]
Jon
31
0

1st up in our Super Impulse gift box, Hello Kitty Pac Man Tiny Arcade! We all know how big Hello Kitty is so when you combine that with one of our all-time favorite video games, Pac Man, we’re hooked! Join Jon as he explores one of the latest Hello Kitty toys, with this Pac Man […]
Jon
12

About This Episode We check out a new Amazon series about a mysterious comic book that predicts the end of humanity, test drive some open source software to improve your 3D printing experience, and play a game where you take the role of a deadly pathogen trying to wipe out the human race! Patreon » […]
Jon
24
0

About This Episode In the late ’80s & early ’90s, Nancy Reagan’s “Just Say No” campaign strove to keep our nation’s youth from illicit drug use. The approach and effectiveness of the program is often debated, but there’s no debate that it was front-and-center if you grew up as a GenX’er in the U.S.. So […]
Jon
16
0

About This Episode In this episode we click on a new documentary that explores the impact of social networking, discover a wealth of unexpected resources available for free on a government website, and check out a modern game featuring everyone’s favorite ape: Donkey Kong! Patreon » patreon.com/genxgrownupDiscord » GenXGrownUp.com/discordFacebook » fb.me/GenXGrownUpTwitter » GenXGrownUp.com/twitterWebsite » GenXGrownUp.comPodcast […]
Jon
33
0

We got one! The My Arcade Contra is a premium mini arcade cabinet from My Arcade which is giving stiff competition to the super impulse tiny arcade units. Yes, it’s more than double the price, but as we saw with the My Arcade Space Invaders unit, it could be money well spent. So here’s Jon […]
Jon
22