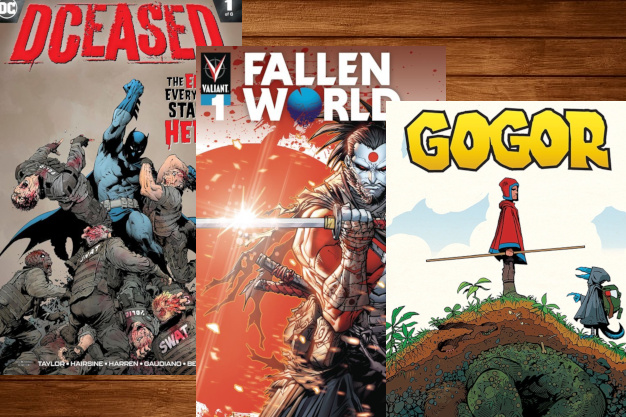 Welcome back to my ever-evolving comic reviews. Each week I will review a few new releases you may have missed on new comic Wednesday. As things change, mostly my mood, so will this column. Some weeks may be several new comics from various publishers or sometimes just one. There might be a time when it’s a longer review for a book I’m really excited about, and every now and then I may throw in a review of a retro book from years past. You never know!

This week is two firsts for the column from DC and Valiant. I’ll also take a look at a new fantasy series from Image. I wouldn’t be a good comics columnist if I didn’t remind everyone that Saturday May 4th is Free Comic Book Day, so act accordingly. 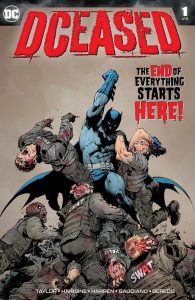 Some of you may think that looking at Facebook too long may turn you into a zombie. According to DC’s newest series, DCeased, it will! A techno-virus comprising a new Anti-Life equation created by none other than Darkseid has made it’s way to earth to a phone near you. Within seconds millions are infected. Superman and Batman try to respond but it’s already too late for a few of our favorite DC heroes.

If you couldn’t tell from the title or numerous variant covers, this is DC’s foray into the Zombie genre. This fast-paced action story does not pull any punches. Things start out grim with narration by a yet to be revealed narrator. The Justice League has defeated Darkseid and it should be a happy time. It’s great seeing so many heroes on a page together. We get a strong dose of reality, though. What happens next goes from light to dark.  I was expecting a depressing, hopeless zombie tale. While it certainly is that, the book doesn’t take itself too seriously.  The creative team does an excellent job of moving the plot along with giving us plenty of action. Initially, I was turned off by the art. At times some heroes do not look proportional. However, once death arrives the art feels more appropriate.

If you like superheroes and zombies, then this is the book for you. The virus being spread by social media is a fun concept. This is definitely a “popcorn film” type story. Do not expect any deep revelations. However, you will be very entertained at the madness contained in this story. Marvel had success years ago with their Marvel Zombies line. This issue looks like DC is off to a good start with their own zombies. 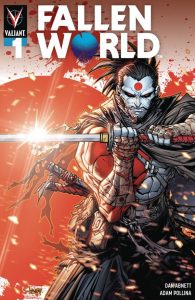 Valiant is kicking the summer off with a big event. Fallen World takes place in the far future and features two of the publisher’s popular characters, Bloodshot and Rai. The Eternal Warrior is thrown in for good measure. Rai is trying to find humanity while Bloodshot is trying to save the world. In the year 4002, the world is in a bad spot with dinosaurs running around causing all sorts of trouble. Will these two heroes on separate quests be able to work together? Given the last page, it looks like a no.

I’m most unfamiliar with Valiant’s line. I know the basics and can recognize most of the characters. As far as anything deeper, I’m useless. I have been looking at a means of jumping in. With a big event, I thought this might be the chance. While the issue does give some history to fill in those you may be new, I was still somewhat lost at times. That could be on me for bringing my baggage of unknowing and not just looking at it as a fresh story. The biggest question for me was, what have these characters previous interactions been like? What have they done in the past to make me care about what’s happening now? We get some insight but not enough for me to be invested. With that said, as presented the characters do appear to have a rich history which made me interested enough to look up their previous adventures. Also, the artwork by Adam Polina is very fitting for a big summer event. I also really like the cover featuring Rai.

I have a feeling Valiant fans will very much enjoy this issue. If you’re a Valiant fan and have read this, let me know what you think. I don’t know if this ideal for newcomers. The artwork and characterization is strong but may work better for those already invested. Valiant’s Free Comic Book Day offering, Bloodshot, will offer a prologue to Fallen World. This prologue may offer some clue to Fallen World #1.

Young Armano is on the run with his mole. The young would-be scholar is escaping an overthrow of his college. Along the way he’s chased by soldiers on dung beetles and meets a talking, blue dinosaur bird. Armano and his companion set out with the aid of a scroll set out to summon the ancient Gogor. With the land, which is actually a series of floating islands, in danger of the rising Domus army Gogor may be the only hope.

This is a pretty weird little book. What do you expect when you’re introduced to a dude on a mole being chased by other dudes on beetles? This issue is fast-paced yet we get everything we need to know or at least almost everything about this world. The opening sequence, while appearing to be very simplistically drawn, is pretty fun and action-packed. The reveal of the world’s formation is pretty neat. This book has a feel of another fantasy classic, Bone. Much like Bone, while there is a lingering danger, it’s still fun and earnest. The lead character is a bit bland. He’s a decent lead but there’s not much depth to him, yet. My biggest issue was the villains. The Domus, we’re told, are trying to lay claim to the realm but we don’t know much about them. Right now, the Domus just come across as a bunch of thugs on bugs. I was most impressed by the artwork. Ken Garing has an interesting style but it is very vibrant and detailed if you’re paying attention.

Gogor #1 is a good intro into a unique world. The world building is solid however there could be a bit more character development.  If you like unique takes on fantasy and riding on moles, then this book is for you.

Hope you enjoyed this week’s reviews. I’ll be back with a new crop of reviews. For more comic reviews, insight, and commentary on comics old and new check out the Drawn & Paneled podcast wherever you get podcasts!

Cassettes on the Outside, USB Drives on the Inside! | Enfain vs. Re-Historic Comparison